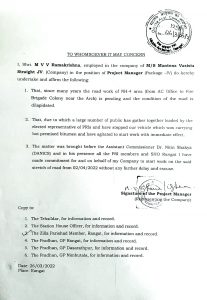 The residents and shop owners are restless due to the dust emission from the said dilapidated condition of road in and which also may cause serious road accidents. The frustration and anger of the people has been observed today and as a result of it, the Project Manager of the said contractor has given an official undertaking in the presence of Assistant Commissioner Dr. Nitin Shakya (DANICS) and Station House Officer of Rangat Police Station. The Zilla Parishad of Rangat Shri Tapas Roy with other leaders expressed his gratitude towards the Assistant Commissioner and Police officials for their timely interference in this public agitation and assured starting of road work within 02/04/2022 from the contractors’ side by obtaining written undertaking.